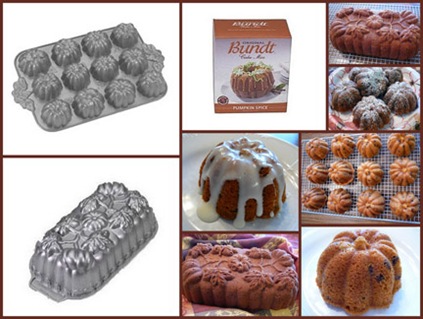 That’s right I’m the lucky new owner of two fabulous Nordicware pumpkin pans! So what’s a girl to do. Get baking of course! So far I’ve tried three pumpkin chocolate chip bread recipes. (The pans are fabulous by the way! Nothing stuck and they look so fun!)

First I used the Nordicware Pumpkin Spice Bundt Cake mix that I won, adding chocolate chips. The mix was convenient and you could smell the wonderful spices in the mixing bowl. It had a nice flavor but if I used it again I would add some pumpkin puree to add more moisture.

I often buy Pumpkin Chocolate Chip bread at Great Harvest Bread Company. Their pumpkin bread is fabulous! Moist and delicious with a perfect blend of spices. I’ve tried the last few years to find a recipe I liked as much, but haven’t been successful until now.

My son’s first comment after he took a bite was, “this tastes just like the pumpkin chocolate chip bread you buy.” I thought the recipe was fabulous, but it reminded me more of a delicious, moist pound cake with a wonderful sugary crust on the outside.

The third version I made using our family favorite light banana bread recipe substituting pumpkin for the banana and adding different spices. These were a bit heavy and my husband said, “These aren’t as good as the last one’s you made.” Of course not, they had half the fat, sugar and calories!

So the clear winner was Amy’s Ultimate Pumpkin Bread. Thanks Amy for sharing your recipe! Also a huge thank you to Jenny and csnstores.com for the fabulous giveaway! Here’s my version of Amy’s recipe: 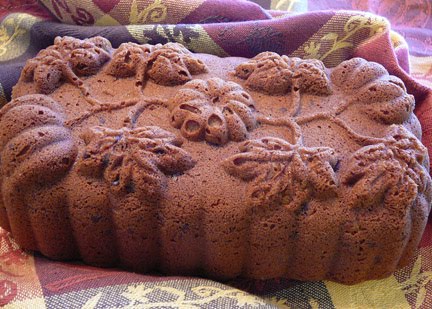 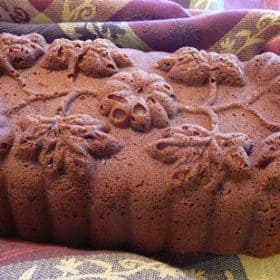 In a medium bowl, mix the flour, spices, salt, baking soda, and baking powder and set aside.

In the bowl of a stand mixer with the wire whisk attached, dump in the sugar. Take the butter and put it in the microwave for about 30 seconds, so that it is half melted. Dump it into the sugar. Add the eggs. Cream these three ingredients together on medium speed for about 2 minutes or until fluffy. Add the pumpkin and combine well.

In three batches, add the dry ingredients mix gently until each batch is just incorporated. Scrape the sides between each batch. Mix in chocolate chips.

Pour batter into prepared pans. Bake side-by-side for about one hour or until an inserted knife comes out clean the top is golden. The mini pumpkins baked for about 25 min.