July’s Daring Bakers’ Challenge was a Filbert Gateau with Praline Buttercream chosen by Chris of Mele Cotte. I’m not crazy about nuts, so I decided to do as many others are doing and used up the almond flour left over from the opera cake. I used orange juice and orange marmalade for the glaze. My opera cake didn’t rise much and I don’t really like buttercream, so I decided not to use a 10 inch pan and cut it into 3 layers, and just used two 9 inch pans and baked it just until it started to pull away from the sides of the pan and was springy on top, about 18 minutes – which was maybe a little too long. 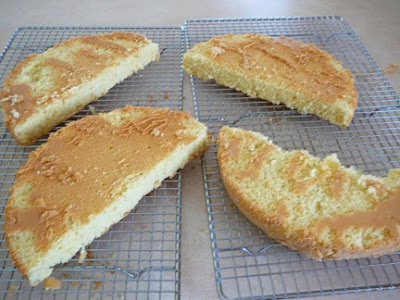 I had a lot of trouble with this cake. I usually use parchment, but since the recipe didn’t call for it, I just used grease and flour, and my cakes stuck to the pan. Not just a little stuck, like I’ve sometimes felt in the past, where you know it is stuck in just one place, this cake felt absolutely stuck to the pan everywhere. At first I considered cutting it up and using it for trifle, but then I decided to see if I could cut it in half and salvage it. Considering how stuck it was, it came out pretty good.

After that disaster, the buttercream came together well, and my ganache was great, but when I took the buttercream out of the fridge after putting on the ganache, it had almost turned to butter. I tried whipping it, but it didn’t seemed to help, so I thought I could warm it a bit in the microwave, which just turned it into soft butter. So I melted it, added powdered sugar and piped it on the cake. 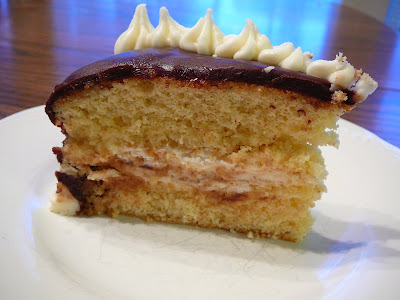 It looked much prettier uncut when I could hide all my mistakes with frosting. I liked the combination of orange and chocolate ganache, but I prefer a moist cake and wouldn’t make this one again. But it was definitely a learning experience! Thanks to my kind neighbor for sharing the cake with us.