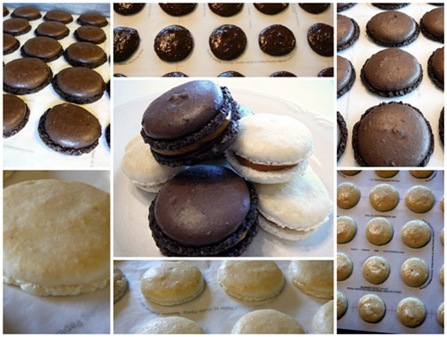 The 2009 October Daring Bakers’ challenge was brought to us by Ami S. She chose macarons from Claudia Fleming’s The Last Course: The Desserts of Gramercy Tavern as the challenge recipe.

This was not my first attempt at making macarons. In September Twitter was all abuzz about the finicky like pastry and I joined with others around the globe in a Mac Attack. Who knew that one little cookie could be so temperamental and difficult to master. My first attempts at macarons yielded a delicious but less than perfect macaron with tutus instead of feet.

In hopes of finally conquering the challenge of creating a perfect macaron, I read and reread all the tips and suggests for this month’s challenge. I aged my egg whites on the counter.  I weighed my ingredients. I sifted my almond meal. I whipped my whites until stiff peaks formed and the peak did not fall over. I used stacked cookie sheets. Although short of the perfection I was hoping for, my macarons have definitely come a long way baby.

For my first batch I used vanilla sugar and made Audax’s two egg version of the Daring Bakers recipe, but I doubled the granulated sugar. They were a bit undercooked and sticky, even after trying to dry them in a warm oven, but still delicious! Both macarons are filled with dulce de leche.

Visit the Daring Bakers’ Blogroll to see macarons in lots of wonderful flavors and all the colors of the rainbow.