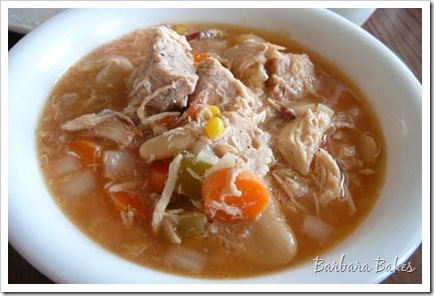 The 2010 April Daring Cooks challenge was hosted by Wolf of Wolf’s Den. She chose to challenge Daring Cooks to make Brunswick Stew. Wolf chose recipes for her challenge from The Lee Bros. Southern Cookbook by Matt Lee and Ted Lee, and from the Callaway, Virginia Ruritan Club.

Some recipe call for the original addition of squirrel, but most allow for chicken, turkey, ham, or pork, even beef on occasion. Rabbit is also used. The vegetables can vary widely from variation to variation, however, the Brunswick Stewmasters recipe says *exactly* what is used in competition stews, and states that “Adding any additional ingredient(s) will disqualify the stew from being an original Brunswick Stew.” However, most agree that, Brunswick stew is not done properly “until the paddle stands up in the middle.” 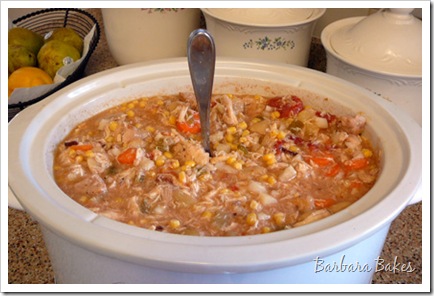 We were given a choice of two recipes and I chose to make the first one which was the longer version. I used chicken, pork and bacon as my meats. I cooked it over two days because the day I wanted to serve it was so busy. In the end I was in such a hurray to get it on the table, I forgot to add the vinegar and lemon juice to the completed stew.

It was fun to try this Southern classic and I thought it was okay, but my family didn’t care for it very much. Even though I only added half the onions called for in the recipe, my daughter picked most of the onions out of her stew. I think they may have liked it better if I had made it more spicy. My version reminded me of a ham and bean soup.

Although we didn’t love this recipe, many Daring Cooks did. Visit the Daring Kitchen Recipe Achieve for the recipes and the Daring Cooks Blogroll to see other delicious versions of this stew.

I am co-hosting the May Daring Cooks challenge with Bunnee of Anna + Food. I can’t wait for the Daring Cooks to see it. I hope you love it as much as we do.