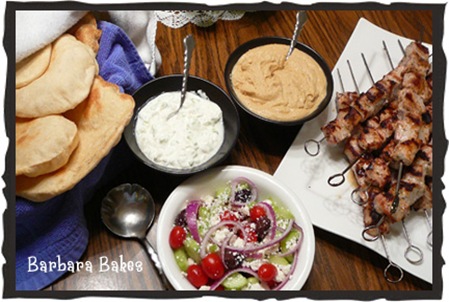 The 2010 February Daring COOKs challenge was hosted by Michele of Veggie Num Nums. Michele chose to challenge everyone to make mezze based on various recipes from Claudia Roden, Jeffrey Alford and Naomi Dugid.

Mezze is a selection of appetizers or small dishes. The challenge requried us to make two mandatory items: pita bread and hummus.

At first, I had mixed feelings about this challenge. I’d been wanting to make homemade pitas for a while, but I’m not a big fan of hummus and I didn’t think my kids would like it much either. However, we did have the option of substituting nut butters for the sesame paste, and since we liked last month’s peanut dipping sauce, I decided to make a peanut butter hummus.

My family loves Souvlaki, so it was a logical addition to our mezze, along with Cucumber Raita and a crisp Greek Salad.

It was such a great meal and it came together quicker and easier than I had imagined. It was so fun watching the pitas puff up in the oven and fresh hot bread is always so much better than packaged. The peanut butter hummus is probably not something I’d make again, but it was delicious. It was so much creamier and less oily than the hummus I have had in the past.

Thanks Michelle for a really fun challenge! Visit the Daring Kitchen for the Mezze recipes.