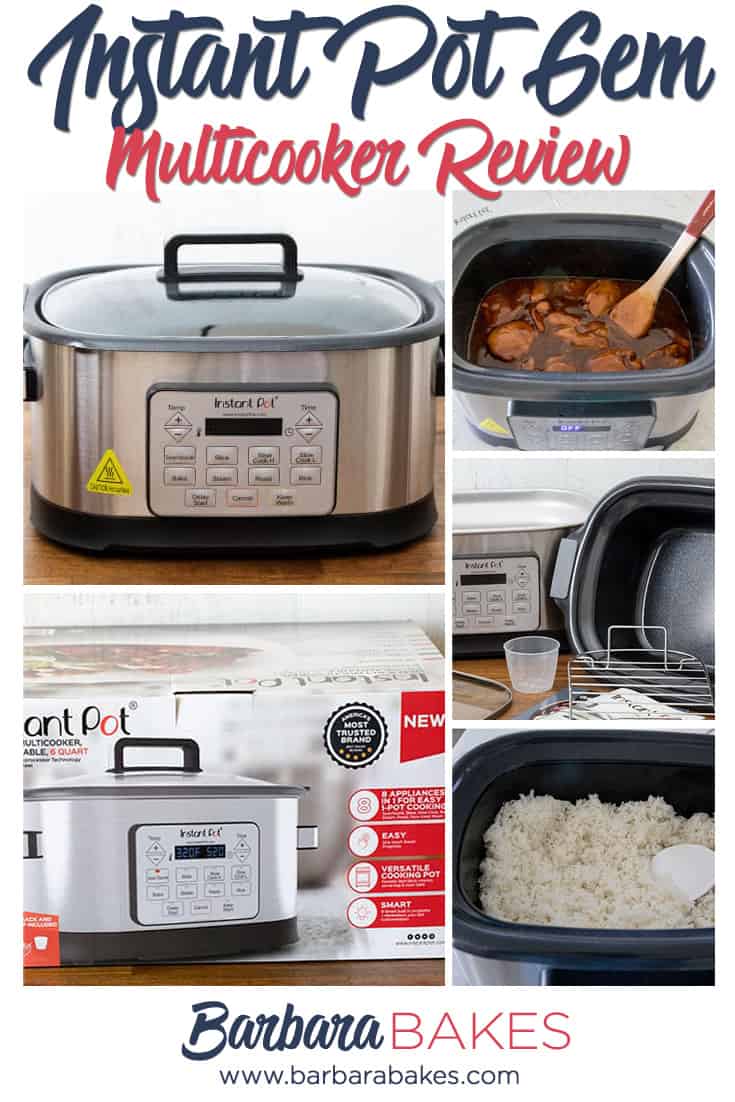 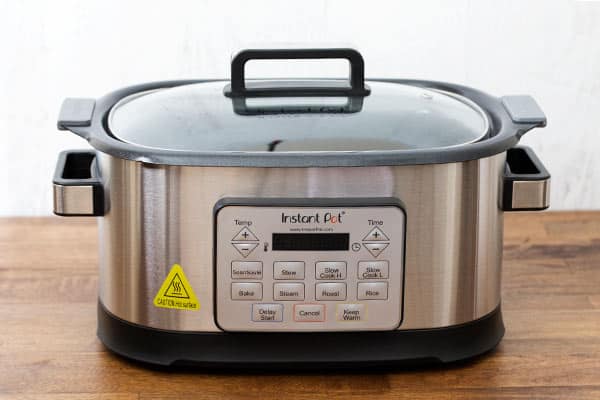 Instant Pot recently sent me their Instant Pot Gem Multicooker to take for a test drive. The Gem is not a pressure cooker and does not have any pressure cooking functions. 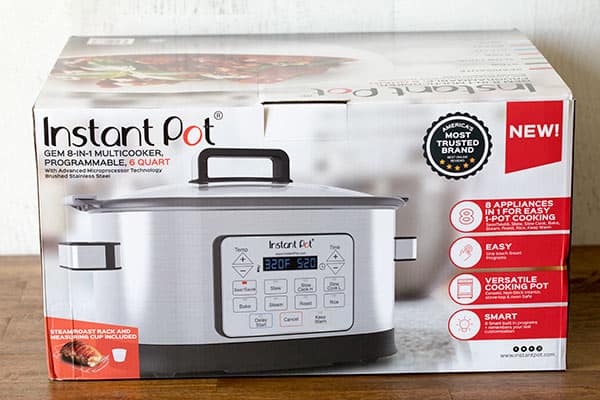 GEM Multicooker is built with an embedded microprocessor. The microprocessor carefully controls the time and temperature to ensure consistent cooking results. 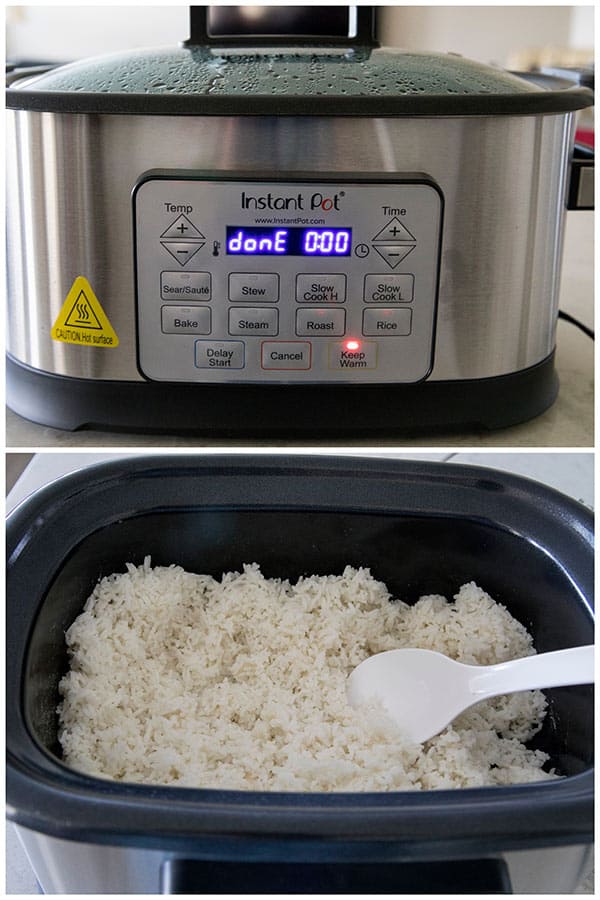 I used the rice function to cook a large batch of white rice. All you do is add the rice and water according to the ratios given in the Gem recipe cookbook. Then the GEM automatically adjusts the cook cycle and time to give you fluffy well cooked rice.

After the GEM brings the rice to a boil and the rice is steaming, the time pops up on the display and counts down to when your rice will be finished.

While not every grain was perfectly cooked, I was really impressed with the quality of the cooked rice and the ease of cooking rice in the GEM. 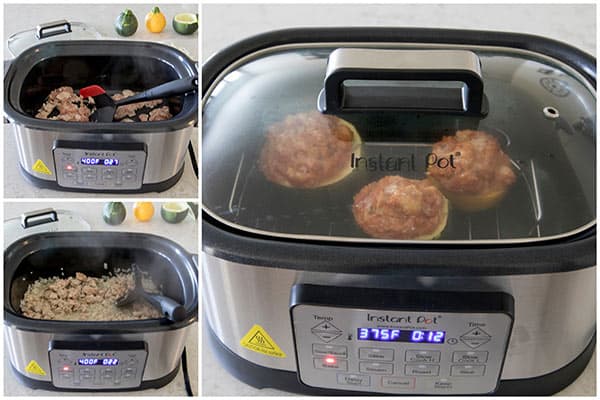 Next I decided to test out the saute and bake functions on the GEM using some 8 ball zucchini I bought at the local farmer’s market. I adapted my Stuffed Zucchini Boats recipe.

First I used the saute function to brown the chicken sausage – I love that you can brown in slow cookers now instead of dirtying a skillet. Next I sauted the onions and garlic, added the tomatoes and spices and removed the stuffing to a bowl.

I put the lid on top and set the GEM to bake at 375 degrees. About 30 minutes later, my stuffed zucchini were perfectly baked and ready to eat. The cheese on top did not get browned like it would if I were baking in the oven, but I didn’t have to turn on my oven in the 95 degree weather we were having either. 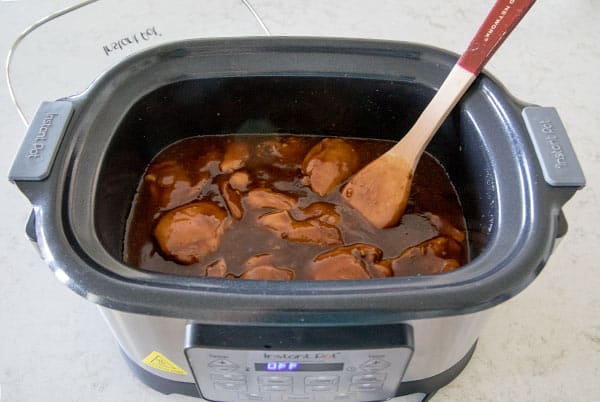 Finally, I decided to test out the slow cook function using my Spicy Honey Garlic Chicken recipe. I thawed out some chicken thighs overnight. In the morning put the ingredients in the GEM on slow cook on high so it would be ready at lunch time.

It was great that I didn’t have to use a saucepan to thicken the sauce like I would have had done in my old slow cooker. I also loved having the option to cook the chicken at a higher temperature if the slow cooker wasn’t cooking it fast enough. The chicken is sweet with just a little kick and was delicious cooked in the GEM. 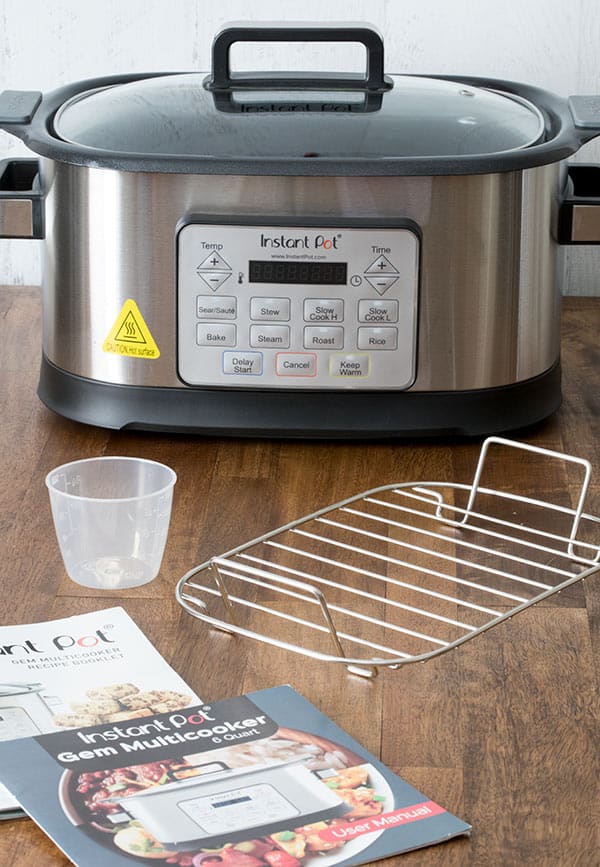 The Gem comes with a rice measuring cup, a steaming rack, an instruction manual that’s easy to follow, and a small recipe booklet. It has a 6 quart ceramic non-stick inner pot that is stove-top and oven safe.

The Gem is available at Wal-Mart in store or online at Walmart.com. 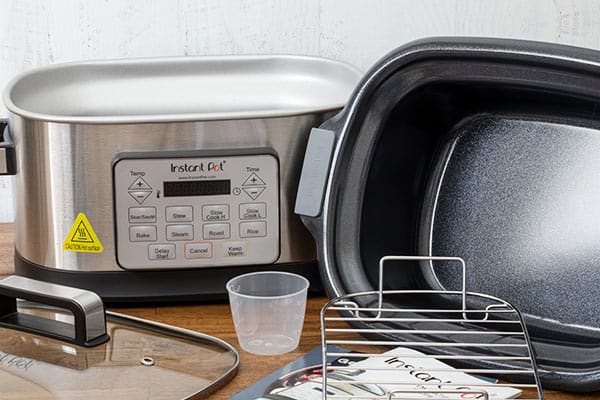 I am not a big fan of slow cooking. If I can pressure cook something in a fraction of the time, I generally choose that. However, I was impressed with the added features of the GEM that make it a much more versatile appliance. Also, the shape of the GEM and the glass lid make it easier to slow cook in than the Instant Pot pressure cookers.

I plan to donate my old slow cooker to Good Will and will use the GEM whenever slow cooking is the best option.

Disclosure: I was sent an Instant Pot GEM Multicooker to review, but all opinions expressed are always my own.