I’ve teamed up with Hershey’s to help introduce their new spreads. Hershey’s now offers a chocolate spread, a chocolate almond spread, and a chocolate hazelnut spread. These delightful spreads are slated to be in stores starting this weekend. 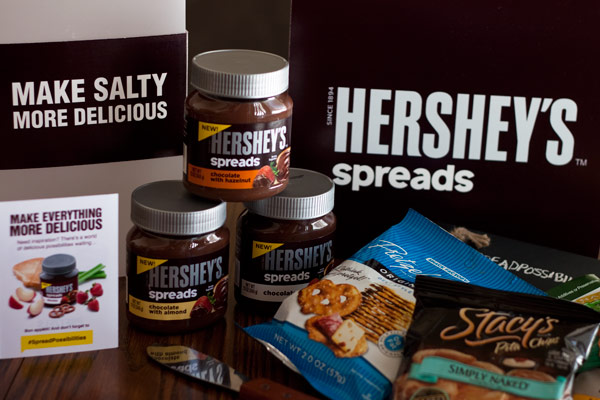 I’m a lover of chocolate hazelnut spreads, so I was excited to try Hershey’s new spreads. They sent me a package with all three spreads and lots of salty snacks to explore new spreading possibilities. I had been using chocolate hazelnut spread in recipes and spreading it on toast (okay and eating it right out of the jar on a spoon), but I hadn’t explored pairing it with salt snacks. What a great idea.

So the other night, a couple of hours after dinner when my sweet tooth came calling, I decided to give the new spreads a try. I opened all three of the jars, which felt a little bit naughty, since I’m generally a you-should-finish-one-treat-before-you-open-the-next-one kind of girl.

I was most intrigued with the chocolate almond spread because I’m an almond lover, so I tried it first. It’s smooth and creamy and definitely tasty on a salty Pretzel Thin. 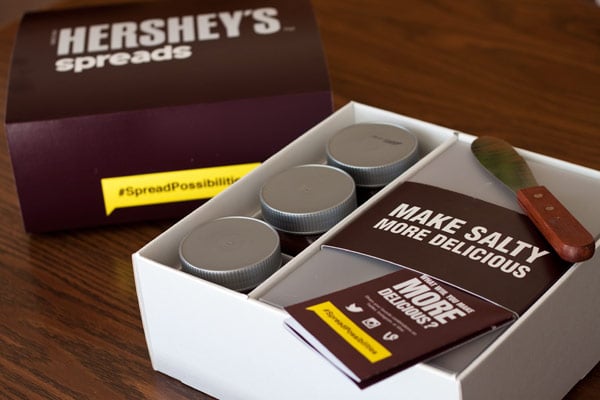 The nut flavors aren’t in your face, they’re kind of subtle. I wondered if they were too subtle, so I asked my husband to do a blind taste test. I put each of the spreads on a spoon and had him sample them without looking. He could easily tell the three apart. So the flavors are not too subtle. 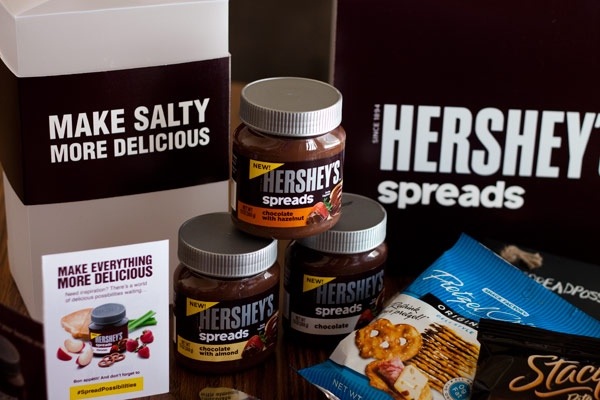 I’ve agreed to be part of Hershey’s #spreadpossibilites campaign and will be posting four fun posts in the next few weeks. Next week I’ll do a fun pairings posts. The following week I’ll post a new recipe I’ve created using one of the spreads, and host a giveaway for a Hershey’s Spreads package. In my final post I’ll announce the giveaway winner and share some final thoughts on my adventures using the spreads.

The spread is available in stores beginning this weekend. Pick up a jar and leave me a comment letting me know what you’re spreading it on. I know some chocolate banana crepes are in my future.

Disclosure: This post is sponsored by Hershey’s, but all opinions expressed are always my own.