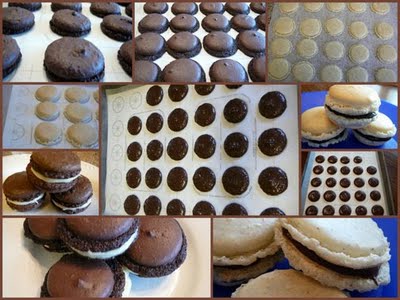 No not a Big Mac Attack. My Mac Attack the past two weeks has been all about the wonderful french pastry the macaron. The macaron is made of egg whites, almond flour, powdered sugar and sugar. A similar pastry called macaroons are a dense cookie made either with coconut or almond paste. Macarons are sandwich-like pastries made with two thin cookies and a cream or ganache between the cookies. I’ve had lots of macaroons in my life, but I’d never eaten a macaron.

When my good blogging friends Jamie of Life’s a Feast and Deeba of Passionate about Baking began tweeting about making macs and creating a challenge, I thought it would be a fun chance to try something new. Jamie, the Mac Queen, challenged our little mac group, Deeba of Passionate about Baking, Hilda of Saffron & Blueberry, Aparna of My Diverse Kitchen, Meeta of What’s for Lunch, Honey?, Ilva of Lucullian Delights, Shelley of Shelley Bakes, Erin of Explore and Eat, Deborah of Italian Food Forever, Rachael of Fuji Mama, Ria of Ria’s Collection and myself to make two different mac flavors and blog about it.

I love baking cookies! But the macaron is not a cookie that you can throw together and it will be fabulous no matter what. Oh no! The macaron is a fussy little french pastry that brought me to my knees! Four times I tried to create a perfect mac and four times I failed. 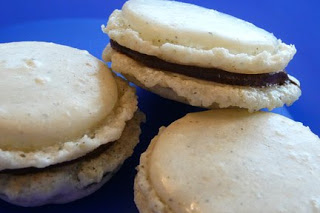 My first attempt started off well I thought. The little feet started to develop in the oven, but then they started to spread out and became ruffles. It was fairly taste, a mint and chocolate ganache flavor, but had a huge air pocket underneath a too crispy top. 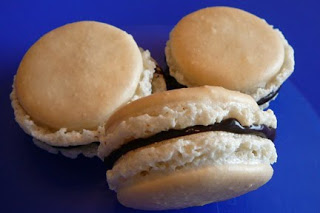 I was confident that my second attempt would be better. I read lots of tips and information on lots of great blogs about creating the perfect mac. I determined I probably didn’t beat my egg whites long enough and perhaps needed to cook them at a higher temperature because of my high altitude. However, despite my changes, disappointly once again I got ruffles instead of feet. 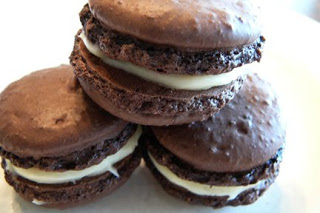 On my third attempt I decided to try a different recipe, Deeba had achieved success using David Lebovitz Chocolate Macaron recipe. I was thrilled to see the little feet develop in the oven and not spread into ruffles. I thought finally I had achieved success. But no such luck. I overcooked them and they were crunchy. They also had a beak on top. 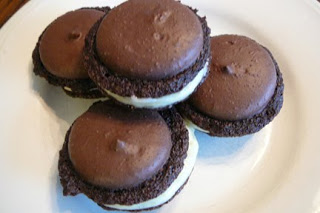 I had just enough almond flour left for one more attempt. So this morning I again tried to create a perfect chocolate macaron. I was told the reason I had beaks was undermixing, so this time I mixed the batter a bit more, which resulted in ruffles again. But…

I did not overbaked them this time. I did not have a shell that was too crunchy. I had a delicious chocolate macaron with a slightly crisp exterior and a delightful chewy interior – a wonderful French pastry that when everyone in my family tried one they said, “Ohhhhhh”. They were not perfect. They had a ruffle. They had a little beak. But they were delicious and they gave me hope that one day I will create a perfect macaron.

Thanks to everyone who tweeted and lent their expertise to the mac making process! Visit Life’s a Feast on September 16 for a delicious mac round-up. 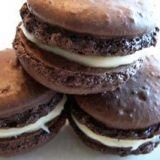 Line two baking sheets with parchment paper and have a pastry bag with a plain tip (about 1/2-inch, 2 cm) ready. (Setting the pastry bag in a glass while you fill the bag was a great tip I learned during this process.)

Grind together the powdered sugar with the almond powder and cocoa so there are no lumps; use a blender or food processor since almond meal that you buy isn’t quite fine enough.

In the bowl of a standing electric mixer, beat the egg whites until they begin to rise and hold their shape. While whipping, beat in the granulated sugar until very stiff and firm, about 2 minutes.

Carefully fold the dry ingredients, in two batches, into the beaten egg whites with a flexible rubber spatula. When the mixture is just smooth and there are no streaks of egg white, stop folding and scrape the batter into the pastry bag (standing the bag in a tall glass helps if you’re alone).

Pipe the batter on the parchment-lined baking sheets in 1-inch (3 cm) circles (about 1 tablespoon each of batter), evenly spaced one-inch (3 cm) apart. (There is a great macaron template here. Thanks for the link Fuji Mama)

Rap the baking sheet a few times firmly on the counter top to flatten the macarons, then bake them for 15-18 minutes. Let cool completely then remove from baking sheet. (I only baked mine for 11 minutes.)

Adapted from The Sweet Life in Paris (Broadway) by David Lebovitz