Easy-to-make, rich fudgy brownies swirled with smooth, creamy cheesecake and loaded with chocolate chips. A decadent dessert that will cure any brownie craving.

I’m a little bit addicted to cheesecake brownies. Late at night when I’m craving something sweet, I often go to Kneaders for a cheesecake brownie. I love the contrasting flavors and textures. The smooth cheesecake, the fudgy brownie, and the chunks of chocolate chips is a heavenly combination.

One night last week, I was craving brownies, but fortunately, my husband and boys were home to help me eat them, so I decided to make the brownies at home instead of trekking toKneaders.

These chocolate chip cheesecake brownies are easy to make because they start with a brownie mix. Ghirardelli makes an excellent brownie mix so no one will ever know that they started with a mix. 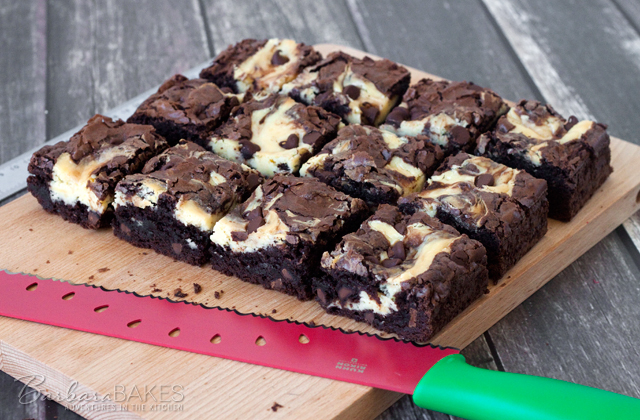 The Ghirardelli Double Chocolate Brownie Mix has chocolate chips in the mix and then you add more chocolate chips on top. I buy the mixes at Sam’s Club or Costco. This recipe uses two 20 oz. pouches.

When I’m cutting bar cookies, I love to use my Kuhn Rikon Melon Knife

. It’s long enough to cut the bars across in one cut, so you don’t have to drag the blade through the bars. The serrated blade also helps me get nice, clean cuts.

I also like to line the pan with foil so I can lift the brownies out of the pan to cut them. It makes it harder to spread the batter, but it’s worth it when it comes time to serve the brownies.

These brownies didn’t even last two days at our house. My oldest son said my cheesecake brownies are way better than Kneaders. I guess I’ll be making them at home more often.