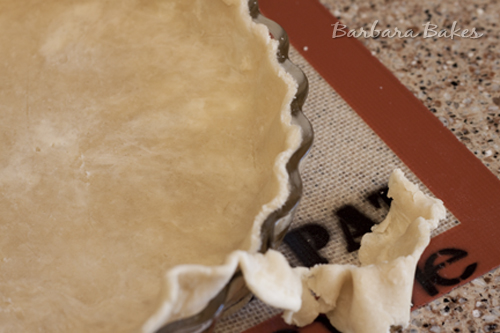 I like a super flaky pie crust which I believe you can only get by using shortening in your pie crust. But I also love the rich taste of butter in a crust. So for me the secret of a perfect pie crust is to use mostly shortening, but also use some butter. You get the flakiness from the shortening and the great taste from the butter.

When I was younger I use to be afraid to make pie crust. The few times I tried they looked terrible. The crust fell apart when I was trying to move it from the counter to the pie plate, or if I managed to get it in the pie plate in one piece it shrank when I baked it. I was usually disappointed with the flavor and they weren’t as flaky as I liked. 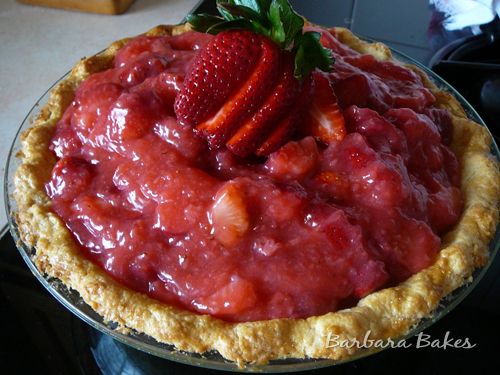 Then one day I saw Martha make a pie crust on her show and it was a light bulb moment for me. She rolled the dough out between sheets of plastic wrap so it was easy to transfer to a pie plate.

I also learned the importance of keeping all the ingredients really cold. High heat explodes solid fat particles. The explosions create steam which lightens and crisps the pastry. At lower oven temperatures, the fat just softens and melts—no explosion, no steam, no flaky crust. I love the precision and science of baking and now pie dough makes sense.

Since starting my blog, I have had several requests for my pie crust recipe. The recipe was on the blog, but it was sort of buried with my Strawberry Pie recipe. So I decided to give it its own post and take step by step pictures to help make it easier for those who struggle to make a great pie crust. 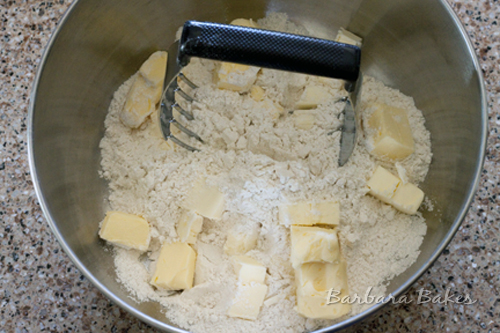 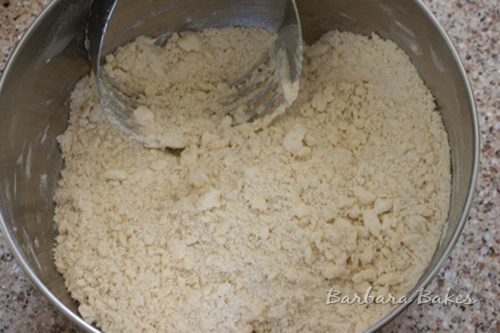 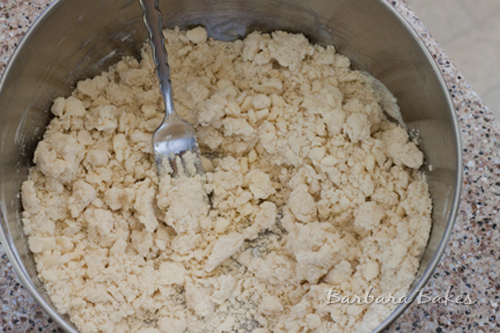 Stir in the water one tablespoon at a time with a fork. The mixture will still be pretty dry. 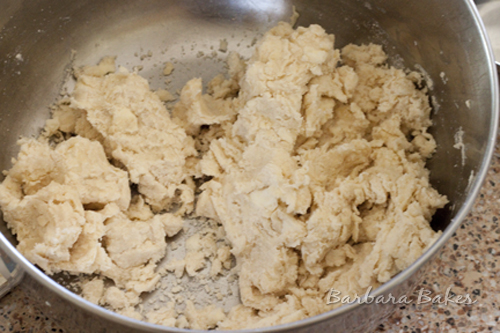 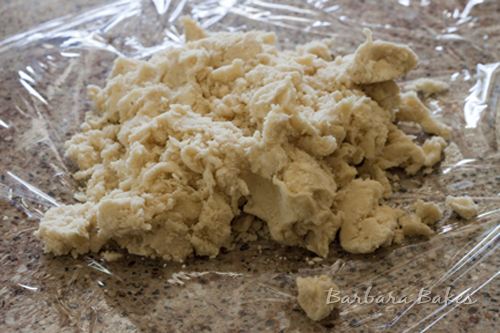 Dump the dough in the center of a sheet of plastic wrap. 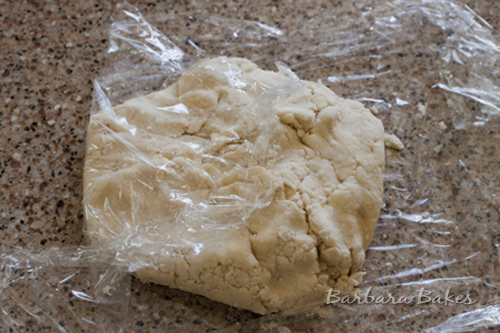 Use the plastic wrap to knead the dough together just a little bit. So it forms a round, flat disc. 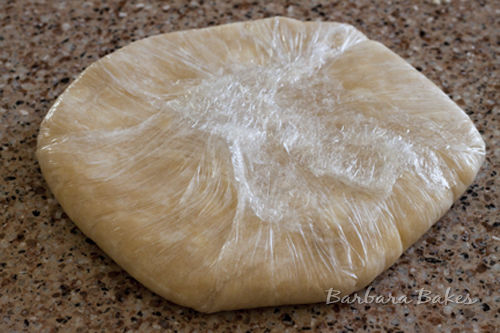 Wrap the plastic wrap around the dough and chill for at least 30 minutes. 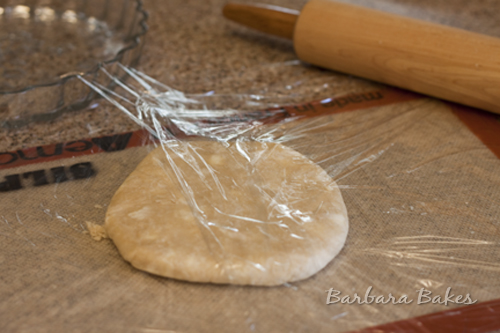 After chilling, remove the dough from the plastic wrap and place it between two (I usually use four – two on top and two on the bottom) sheets of plastic wrap. 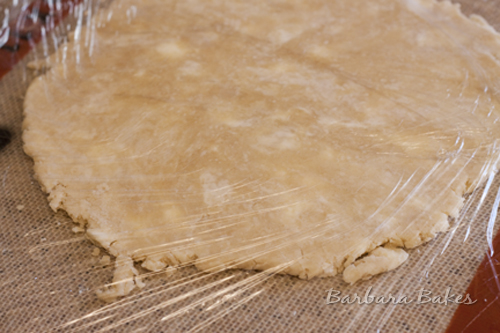 Roll the pie crust out in a circle. If the plastic wrap gets tucked under the dough just straighten it. When I had a Formica counter top the dough would slide around on the counter, so I used a Silpat underneath so it didn’t slide. 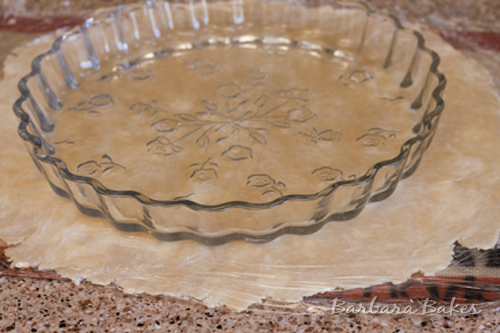 Roll the crust out large enough so that you have plenty of crust for the sides. I like to put the dish in the middle to measure it. 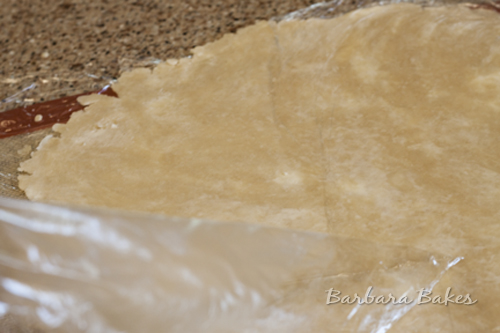 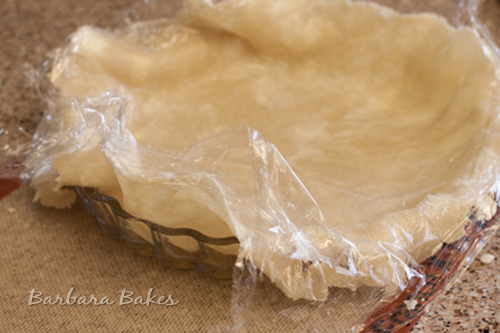 Don’t stretch the dough when fitting it in the pie plate or it will shrink back as it bakes. After you’ve fit the crust in the pan, press it gently against the sides and bottom to ensure that no air is trapped between the dough and the pan. Peel the bottom sheet of plastic off after your dough is fitted into the pie plate.

Finish the edges. This time I used a pretty quiche pan, so I just trimmed it even with the top. Martha has a fun gallery of great decorative pie crust ideas to finish your edges. 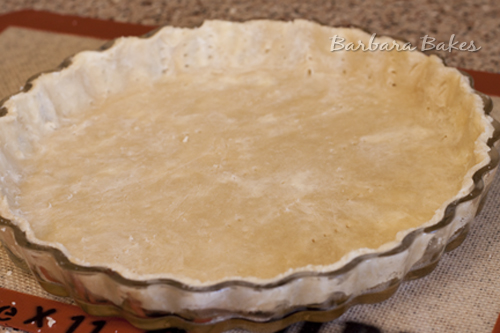 Prick the crust. Chill the pie crust for at least another 30 minutes before baking or filling with your favorite pie filling. I used this crust for a delicious quiche that I’ll post on Monday.

While this isn’t the perfect recipe or technique for everyone, it’s my favorite and works for me. Enjoy!