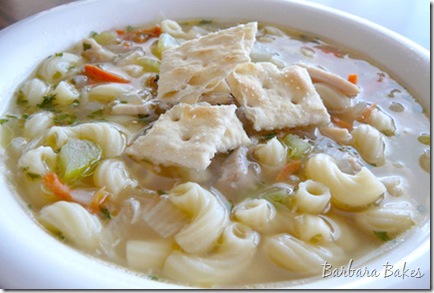 I was never really satisfied with a chicken noodle soup recipe until I found Pam Anderson’s Soup Up Your Chicken Soup article on Allrecipes. Most of the recipes I’d tried before were okay, but didn’t have enough chicken flavor. Or, if the flavor was great, it was so time-consuming that I wouldn’t bother making it again.

I tested a chicken soup recipe a while ago that tasted fabulous. But it involved hours of work and lots of different steps. It even required you to cut the chicken bones into one inch pieces so you could get every bit of flavor out of the bones. What a pain!

This recipe starts with a rotisserie chicken and chicken broth. It cuts hours off the cooking time. You don’t have to chop two sets of veggies and throw the first set away. And best of all, It tastes as good or even better than if you’d spent hours making.

My adapted version is listed below, but in her recipe Pam has a chart of add-ins to make different versions of chicken soup, such as curried chicken soup, or chicken tortellini soup. When my son recently had his tonsils removed I made him the chicken and rice soup, which was the perfect comfort food! 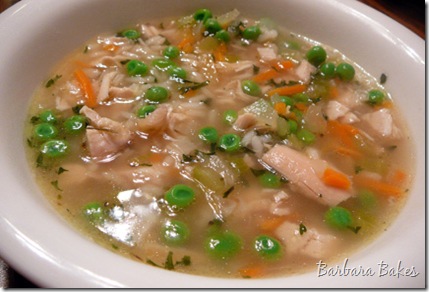 Bring broth and water to a simmer over high heat in a large soup pot. Add skin and bones to the simmering broth. Reduce heat to low, partially cover and simmer until bones release their flavor, 20 to 30 minutes.

Strain broth through a colander into a large container; reserve broth and discard skin and bones.

Return pot to burner set on medium-high and add oil, then onions, carrots and celery. Sauté until soft, about 8 to 10 minutes.

Add chicken and broth. Bring to a simmer. Add noodles and cook until tender.

(Soup base can be refrigerated up to 3 days in advance. Return to a simmer before adding noodles.)

*I always buy one of the big Costco or Sam’s Club rotisserie chickens. I use the dark meat for the soup and save most of the breast meat for making something like BBQ chicken sandwiches or chicken tacos.

Pin
Share
Tweet
We are a participant in the Amazon Services LLC Associates Program, an affiliate advertising program designed to provide a means for us to earn fees by linking to Amazon.com and affiliated sites.
« Previous PostRoasted Tomato Pasta Caprese and Grilled Cheese Sandwiches for the FSK Café
Next Post » Daring Cooks Sweet Risotto: Rice Pudding with Poached Cherries