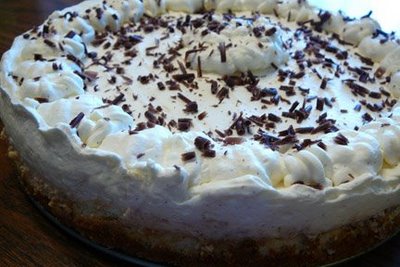 The April 2009 challenge is hosted by Jenny from Jenny Bakes. She has chosen Abbey’s Infamous Cheesecake as the challenge. We were to take the basic recipe and make it unique – a showstopper of a dessert.

Cheesecake is one of my favorite desserts. I’ve made it many times and in many different flavors. Recently I had a coupon for a free dessert at TGIF’s so my husband and I tried the Vanilla Bean Cheesecake. We both fell in love with it! Apparently, we weren’t the only ones who loved it, because when I did an Internet search for a copycat recipe, I found it on lots of websites. 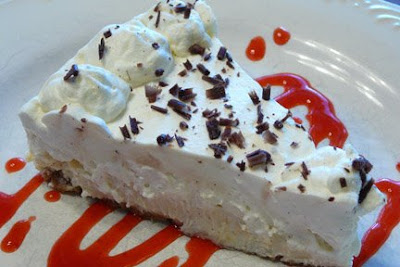 This is a very creamy cheesecake not a dense overly rich one, and everyone loved it. All the boys/men had a second piece. I would definitely make this cheesecake again.

Be sure and check out the other Daring Bakers’ cheesecakes. They’ve out done themselves on this challenge and have created some amazing cheesecakes. 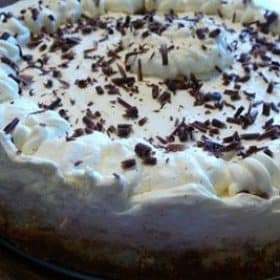 Preheat oven to 350 degrees. Begin to boil a large pot of water for the water bath.

Mix together the crust ingredients and press into your preferred pan. You can press the crust just into the bottom, or up the sides of the pan too – baker’s choice. Set crust aside.

Combine cream cheese and sugar in the bowl of a stand-mixer (or in a large bowl if using a hand-mixer) and cream together until smooth. Add eggs, one at a time, fully incorporating each before adding the next. Make sure to scrape down the bowl in between each egg. Add heavy cream, vanilla, lemon juice, and liqueur (if using) and blend until smooth and creamy.

Pour batter into prepared crust and tap the pan on the counter a few times to bring all air bubbles to the surface. Place pan into a larger pan and pour boiling water into the larger pan until halfway up the side of the cheesecake pan. If cheesecake pan is not airtight, cover bottom securely with foil before adding water. (I didn’t want to risk water getting into my springform pan so I just put a pan of water on the rack underneath my cheesecake.)

Bake 45 to 55 minutes, until it is almost done – this can be hard to judge, but you’re looking for the cake to hold together, but still have a lot of jiggle to it in the center. You don’t want it to be completely firm at this stage. Close the oven door, turn the heat off, and let rest in the cooling oven for one hour. This lets the cake finish cooking and cool down gently enough so that it won’t crack on the top. After one hour, remove cheesecake from oven and lift carefully out of water bath. Let it finish cooling on the counter, and then cover and put in the fridge to chill.

After the cheesecake has cooled spread the mousse evenly on top. Refrigerate several hours before serving.